A 14-year-old photographer has taken the internet by storm with his creative and dreamlike images that make normal-sized people appear tiny.

Zev Hoover, from Natick, Massachusetts, goes by the Flickr username Fiddle Oak, a play on 'little folk', which adequately describes the incredible images that make up his 'miniature world'.

In his fantastical photos in which people are digitally shrunken, acorns make excellent seats, Popsicle sticks are the ideal size for building rafts, and paper airplanes are viable modes of transport.

Zev told Today.com that while he takes the photos with his own camera, his older sister Nell, 18, was the brains behind the original tiny people concept. 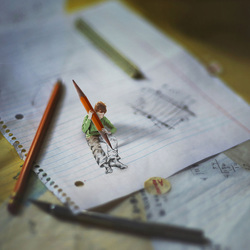 One image shows a boy constructing a house of playing cards, his body the same size as the cards.

In another image, a 'miniature' boy and girl sit upon a raft made of Popsicle sticks, the sail of which is a single leaf.

Many of Zev's images explore nature, including one in which a boy perches inside the shell of an acorn.

Another nature-themed photo, which plays with and distorts size ratio, shows a miniscule-looking boy sitting on the edge of a rock, a violin in his hand.

Imagine being this small.
What would you do?
Where would you go?
How did you end up so small?
Describe what something would look like from below.
Invent your own tiny character, like Grandpa in my pocket, can you send him on adventures?

See More work from Zev below